A bit of everything I think & do

In order to find phishing payloads, one needs to understand how executable filetypes on Windows are handled, finding which ones can be delivered to mail clients, thus users, without being caught by mail defences in between and without requesting multiple validation steps from that user for execution once clicked on.

Other filetypes are also relevant for phishing even if they are not executable per-se, they are also mentionned in this article.

I am pretty sure all presented filetypes have been documented before but the method used below may be applicable for future Microsoft systems or constrained Windows environments to understand why certain filetypes are blocked.

Windows systems associate file extensions with programs, that is how it allow users to double-click a .doc document and automatically opens Microsoft Word. These associations are stored on the system and can be changed according to several criterias such as the security policy of a company or the users' favorite software.

These associations can be retreived using the assoc DOS command:

If we take the exefile from above, it is the file type associated with the .exe extension. The association rules are defined in the assoc manual:

At any one time a given file extension can only be associated with one File Type.

To see what program handles the filetype, one can use the ftype command:

Note the difference in the above:

The former can give file-execution capability indirectly, depending on the used binary. The later would allow file execution directly via a double-click.

Note: I found out that NirSoft has an utility called FileTypesMan that displays many information on filetypes:

They also have a website on which you can look for filetypes and associated extensions: Find which Windows software can open a file with specified extension (nirsoft.net)

An easy way to determine what filetypes (and thus what file extensions) can run without the help of another binary is to look for the same pattern than seen above for the exefile filetype. To do that, we can run assoc without any parameter, it will give us the full list of associations for the current machine:

Extract the right part of the obtained association, i-e the “File Type”:

And look for the pattern seen previously:

Without surprise, we find back our exefile filetype. batfile and cmdfile are also associated with well-known file extensions used for shell scripts on Windows:

Redacting any command in a .bat or .cmd file will result it in execution when it is double-clicked. More uncommon though are the others filetypes:

The first one, comfile is associated with the .com files. It is an old file extension from MS-DOS for batch files and executables:

A COM file is a type of simple executable file. On the Digital Equipment Corporation (DEC) VAX operating systems of the 1970s, .COM was used as a filename extension for text files containing commands to be issued to the operating system (similar to a batch file). With the introduction of Digital Research’s CP/M (a microcomputer operating system), the type of files commonly associated with COM extension changed to that of executable files.

We can test to make one from a small binary executing the cmd.exe /K dir command:

Once compiled, we simply change the file extension to .com and try to double-click it:

It gets executed straight away as expected.

piffile is associated with .pif file extension. PIF stands for Program Information File and according to wikipedia:

A program information file (PIF) defines how a given DOS program should be run in a multi-tasking environment, especially in order to avoid giving it unnecessary resources which could remain available to other programs.

Interestingly in wikipedia’s notes there is the following section:

Let’s try changing our .exe example file with the .pif extension and double-click it:

A screen saver is a computer program that fills it with animated images or patterns when no activity performs on a computer for a long time. The screensavers were introduced to prevent phosphor burn-in on plasma, Cathode Ray Tube (CRT) and OLED computer monitors. Screensavers are usually set up to apply a basic layer of security, by requiring a password to re-open the device. Screensavers are usually developed and coded using various programming languages as well as graphics interfaces. Mostly the developers of screensavers use the C or C++ programming languages, along with Graphical libraries or GDIs, such as OpenGL, which works on many platforms capable of 3D rendering. The screensavers output is saved as a portable executable file.

I-e: .scr files are PEs. Let’s try moving our .exe to the .scr file extension and double-click it:

It gets executed the same way as COM or PIF files.

The above filetypes are, on the system I have tested, the only ones that execute as-is but other filetypes are of interest for a potential attacker.

WScript.exe is used by Windows to interpret different script languages amongst which VBS and JavaScript. We can check which filetypes are associated with that binary on our assocation list:

Many of these scripting languages allow for command execution. Here is a small VBS script as an example:

Save that file to .vbs extension and try to double-click it:

If we make a small Java program:

Compile it, make a JAR from it and double-click it: 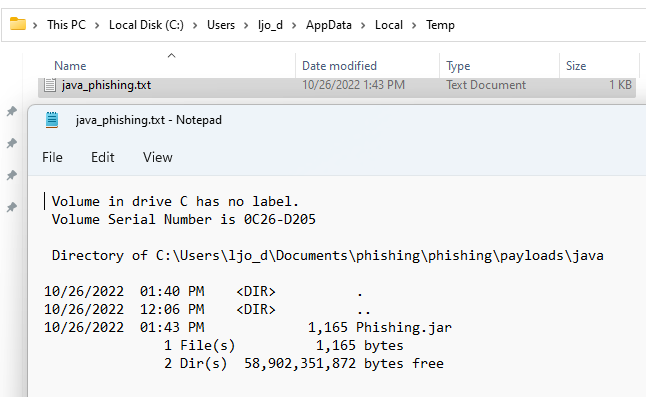 It run without issues but only because the tested system has the Java Runtime (JRE) installed.

More generally, any file extension automatically associated with a code interpreter is a potential vector for attackers. Thus the system I tested did not have python or perl installed, these would work the same way as the above examples.

The LOLBas project provides binaries' names that can be used for execution on Windows systems. If we cross-search that list with the file extension associations we have for a machine, we can find execution-capable filetypes.

For example, the hh.exe binary:

is associated with chm.file filetype. So a CHM file (.chm) will be given as a direct argument of hh.exe. That is an “Execute” case documented by LOLBas:

This time it is not as straightforward as changing the file extension:

There are ways to create a malicious CHM file though.

One has to download the HTML Help Compiler (hhc.exe) that can be found with Microsoft’s HTML Help Workshop (found it only on the wayback machine)

We can create a minimal one:

However, double-clicking the resulting CHM gives a warning the user has to approve:

If the user clicks yes, the command gets executed: 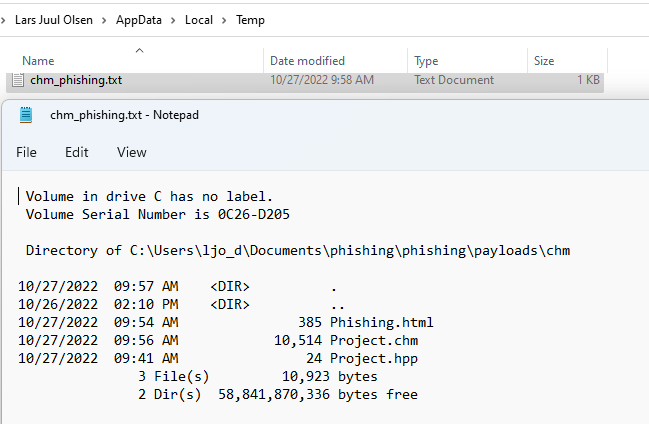 There are attachments filetypes of interest for phishing mails that are not execution-capable. For example, the ones that can trick a user into giving his credentials.

We can check for filetypes started with iexplore.exe:

They resolve to the following file extensions:

An attacker could mimick a known legit website (such as https://login.microsoft.com) in an HTML file, define the extension of this file to one of the above and send it as a mail attachment to trick users into thinking they are authenticating to that website. By clicking on the file, the user’s browser would open and he would be presented with the rogue web page.

SCF files can be used to gather NTLM credentials.

OSDX files are sort of descriptions to add search providers for Explorer, like this one:

Apart from adding a new rogue provider, I do not know if this can be used by an attacker for anything else.

To prevent malicious attachments using the filetypes described above to go through one’s mail defences, I would suggest that one implements an allow list (wether it is in a mail “middlebox” or in the mail client) containing the file extensions one need for its usage. I think denylisting these filetypes is a strategy of failure as it is highly probable that not every case is included in the deny list.

For the case of indirect execution-capable filetypes that are business critical such as .doc or .xls for many companies though, I have no magic bullet but I can suggest the following questions to ask yourself if you are in that position:

There will always be a risk if these filetypes are allowed to go through.